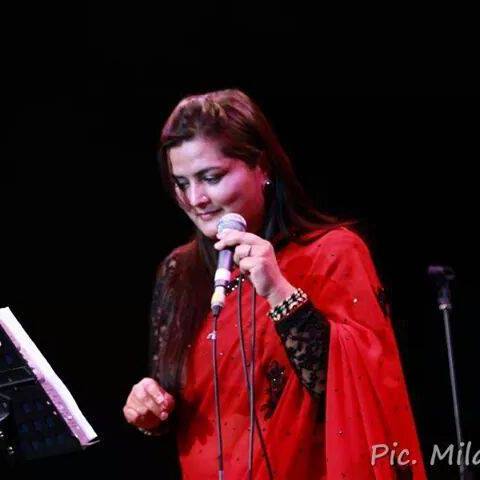 A promising artist and singer, Situ Kharel is a well-known name in the arena of modern Nepali music. Based in London, U.K,she is contributing with sheer dedication and commitment to enrich the contemporary Nepali music.

Situ was born in Kathmandu as the youngest daughter of Kalyan Rimal and Viju Rimal, both well known singers in Nepal. “Since I was a kid there was a musical environment in my home. My dad and mom practicing their raga might have influenced me and remained within me. The interest was deep inside and it only came out when I got married and got tremendous encouragement from my in laws,” Situ told fursad.com in an interview, recently, adding, “I feel there is nothing you can’t do if you have the will power. ” Situ’s musical journey began in Nepal with her first song, “Jaba timro aakha hasi dinchha,” composed by Nhyoo Bajracharya and penned by Kiran Kharel in 2000A.D. Her first album Smarika gets its name from her daughter who is suffering from neurological disorder. Situ believes that her songs have given voices to her beautiful daughter who can’t speak.

Situ is currently pursuing her four-year B. Mus. Degree (Hons) in Indian classical music at the Trinity College of Music in London. She has undergone training from renowned music teachers including Pundit Vishwa Prakash, Mrs Chandrima Mishra and has been awarded Diploma in Indian classical music by Bharatiya Vidhya Bhavan,London. She has got the opportunity to take several master classes with renowned maestros of India like Pandit Jasraj,Pandit Hari Prasad Chaurasia, Begum Parveen Sultana,Shree Dipak Chaudary,Sri Ajoy Chakraborty,Srimati Vina Jayanthy andSrimati Prabha Vati.

Situ has participated in various concerts and performed dozens of times live in stages in Nepal, the US and UK. Situ Night organized in London in 2004 made her probably the first female Nepali singer to perform solo for over two hours in a foreign land. Situ has participated at the Croydon Music Festival. She has also performed side by side with celebrated Nepali artists.

Situ has five solo Nepali albums to her credit namely Smarika (2000A.D.), Simrik (2001), Pari (2004) and Nirman (2005) and Situ(2008). All of her albums have received encouraging reviews from the critics as well as music-lovers alike. Her fourth album, Nirman, is different than her past albums both in terms of style and substance.

She has around 10 music videos of her songs which have been acted and directed by popular artists and directors of Nepal . The music video of the title song of her third album “Paree”, “Meri Pyari Chandrama” has touched the hearts and minds of many audiences.The music video is known for delivering social message “Disabled children need more love and care.”

Situ has actively participated in cultural,social and fund-raising programmes organized by various groups in London and has made financial contributions to Navajyoti Kendra and Doremi Music School in Kathmandu. Situ intends to devote more time in understanding music . For her, music is a form of worship.