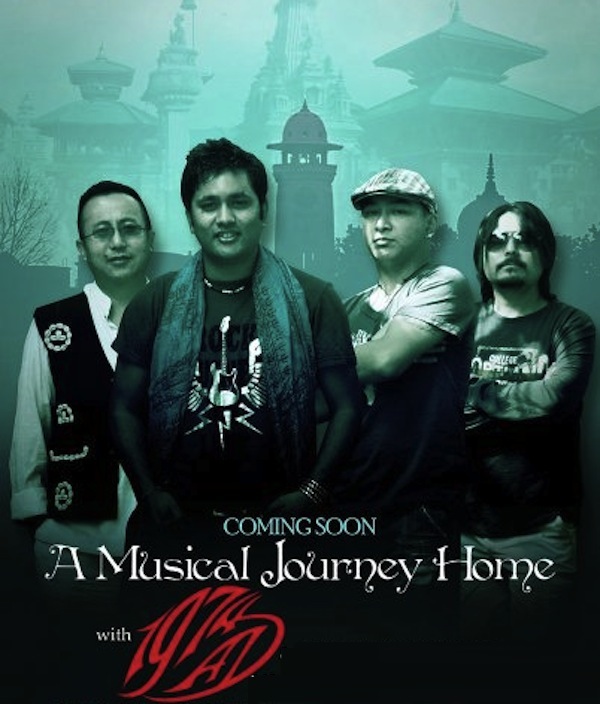 1974 AD is a Nepali rock band, formed in Kathmandu, Nepal in the early 90s. They experiment with various genre of music including Nepali folk, ragas, rock, funk, blues and jazz as well. 1974 AD are amongst the most successful recording artists in Nepal. Most of their albums are ranked among the top-ten best-selling albums according to the Hits FM of Nepal. There concert named ‘Rock Yatra’ in 2000 AD was watched by more than 60,000 people. This is the largest attendance for a concert in Nepal.

Songs and albums produced by 1974 AD are usually in the Nepali language. Lyrics include themes of patriotism, Nepali virtues, unity, love and nationalism. There is a lot of variety in the music of 1974 AD. They have successfully tried various genres of music.

The group was formed during the 90s era by a group of teachers from Gyanodaya School in Lalitpur. The founding members included guitarist Phiroj Shyangden, bassist Nirakar Yakthumba, drummer Bhanu A. During the early days the band used to play various genres including hard rock, heavy metal, rock and blues. Drummer Bhanu A was very much into blues music. Whenever they played cover tunes he was the one singing Gary Moore numbers like “Walking by myself”. They played several gigs around Kathmandu where they used to cover numbers from Bryan Adams, Deep Purple and other rock groups.

Phiroj Shyangden is one the best guitarists in Nepali rock scene. He is a good shredder too and his bluesy rock style has inspired many guitarists in Nepal. He is an excellent guitarist talented in tapping and playing high paced solo with clean tone and perfection.

His style has the flavour of guitar greats like Gary Moore, Ritchie Blackmore of Deep purple and Eddie Van Halen. They mainly performed self compositions. Their hit tune is “Mayaluleh” from their debut album “Time Out”, a song which would establish them as a household name in the Nepali music scenario. That time, the would be band members Adrian Pradhan and Sanjay Shreshta were involved in their own bands. Adrian used to be in a hard rock band from Kalingpong named “The Flame”.

“The Flame” held their first concert in Dasharath Stadium in Kathmandu during the winter of 1994. They were basically a cover band doing songs from Iron maiden, Metallica, Extreme and other rock acts. Adrian Pradhan used to play the rhythm guitar and do the vocal dutiess. The influence of the early heavy metal vocalling can be heard in Adrian’s singing style. Later during the late 90s Adrian joined 1974 AD as their drummer/vocalist after former drummer Bhanu A went on a hiatus. Percussionist Sanjay Shrestha, who used to play the drums for the St Xaviers school band, was involved with Nepali fusion rock act Shristi.

Flute maestro Manose Singh would soon join 1974 AD and enjoy the popularity of the highly successful band and also contribute to the diversity of sound in the band. Later on during the late 90s local guitar enthusiast Manoj K.C from Dhobighat, Lalitpur would join 1974 AD and complete the lineup. Together they would form a rock solid act and go on to conquer the hearts of millions of die hard Nepali fans of Nepal.

The band was very popular in the Kathmandu and Lalitpur rock scene in mid 90s even before they started churning out big hits like “Mayalule” and other tunes. But the release of their debut album established them as a household name in Nepali music. Their compositions which include lyrics on patriotism, self pride as a Nepali and love and unity amongst Nepali people are big hits in Nepali pop culture.

They have come up with a song that has helped the nation unite and express the mutual feelings at times of big changes in country as in the form of political and other big events. The songs can be melodic but at the same time very dark with the lyrics and message it carries. The music covers various genres like heavy metal, hard rock, blues, reggae and funk/soul.

While Manose Singh continues to contribute to the bands newer compositions, given his other musical commitment, Phiroj Shyangden has now exited the band for personal reasons. Not surprisingly, many fans feel a loss, some more than others, in the sound and image of the band. But the band, now with Adrian on vocals and Sanjay on drums, continues to find newer sound. Their new album 8:18 (aath:athara) is scheduled to be released worldwide on August 18, 2010.