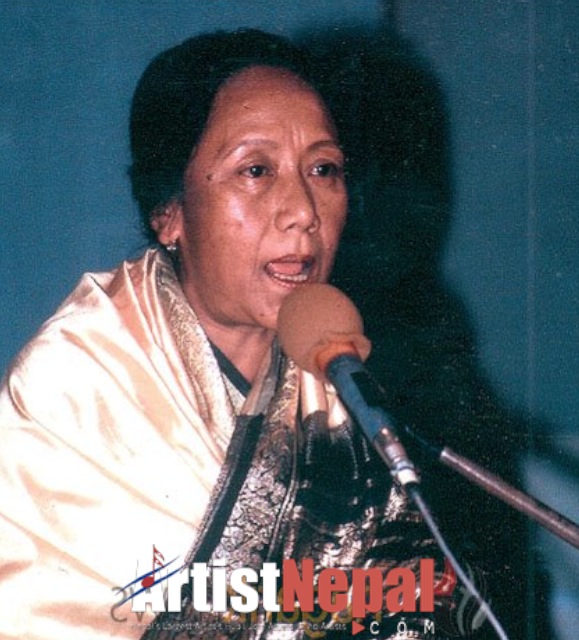 Aruna Lama was highly renowned and talented singer of Nepal. She is also known as “Swar Samraagi” due to her sweetest voice. We can hear her sentimental songs than the romantic ones. Actually her songs are so much heart touched which reflect her own life full of sorrow.

Aruna Lama, daughter of Surya Bahadur Lama and Sanmaya was born on September 9, 1945 (2002, Bhadra 24 B.S) in Darjeeling, India. She had become the voice of the Nepalese people and had charmed many listeners and known as the Nightingale of the Hills. She was inspired by her uncle CB Lama to make her platform in singing. She started singing at the early age of seven and never looked back from then. She won the Music Competition organized by the Gorkha Dukha Niwarak Sangh in the year 1956 at the age of 11. The great Ambar Gurung then groomed her since 1958.

She got married to Saran Pradhan a musician, lyricist and composer on 9th July, 1963. She became so busy with her married life that she gave so less time to her singing career.Soon after persuasion from all the other musicians and artists she came back to the scene again. She gave her sweetest voice on the music composition by Karma Yonzon, Gopal Yonzon, Ambar Gurung , Shanti Thatal, Narayan Gopal, Mani Kamal Chettri ,Dibya Khaling which were so much liked the music lovers.There was something unique in her voice which brought her back to the center stage and she was acclaimed as one of the best Nepali female singers of all time.

In 1974 may-4th midnight 12.30, a big accident caused in her life she lost her beloved husband and she was left with two children and a whole life ahead. She struggled through the difficulties of life and started to work at the Chit fund from where she soon found work at The Scheduled Castes and Tribes Welfare Office and served there till 1998. She was strong willed and she looked after her children and never deprived them of any requirements. Besides working she also kept up with her music and carried on the glory of the Nepali people.

With her beautiful voice she has captured the hearts of many listeners and good wishers and her contribution to The Nepali Music world has been a big one.

As there is a saying that all good things come to end, Aruna Lama passed away on the 4th February, 1998. Though she had left the earth, her voice lives on and her memories shall remain in the hearts of all the Nepalese people forever.