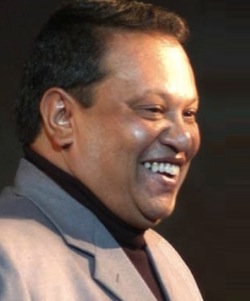 Neer Bikram Shah, also known as Nir Shah, is a Nepalese movie actor, a poet, lyricist, movie director,Producer and businessman. He is related to the Royal family of Nepal.

Neer Shah is the producer or co-producer of many Nepali movies. He has also directed several Nepali movies produced by himself, including Basudev, Pachchis Basanta, Basanti, and a Nepal Bhasa movie Rajamati.

He is also a co-producer of the Oscar nominated film Himalaya – l’enfance d’un chef, which was co-produced and directed by the French movie maker Eric Valli. The film, also released as Caravan (in Canada) and Himalaya (in Denmark and France), was the first film from Nepal to win an Oscar nomination.

Neer Shah has also played antagonistic as well as other character roles in the movies such as Prem Pinda and Balidan. He has also appeared in a few Bollywood movies as a guest artist. Shah has also penned down many Nepali and Nepal Bhasa songs. His songs such as Prem ko maalaa pahiraai diye, samhaali raakha yeslaai…. have even been recorded by the critically acclaimed singers such as Narayan Gopal. Being a literary person he has also done the scriptwriting for few of his films.

In 2001, he served on the jury of Film South Asia ‘01, the festival of South Asian documentaries, along with Firdous Azim and Shyam Benegal.

Neer Shah was first head and founder of Nepal Television (NTV), the first TV station in Nepal and is the chairman of Shangri-La TV (STV), a film production and microwave TV distribution company.STV produced many programmers for NTV and also provided the cable television network in Kathmandu valley. Shah holds 33 per cent equity in a United Kingdom-based firm, Galaxy, which is involved in telecasting Nepalese TV channels overseas.

Along with Nirmal Nicholas Paul, he set up a production company called “888 Films” that produces Nepalese and Hindi films. Another of his companies, National Studio, provides training in various fields of cinema production. He is also one of the proprietors of the New Century Pictures Pvt.Ltd., a film production company. Shah also serves on the Governing Council of College of Journalism and Mass Communication in Nepal.

In 2002, he was felicitated by the Minister for Culture, Tourism and Civil Aviation in recognition of his contribution in the “promotion of Nepalese art and culture and tourism industry”.