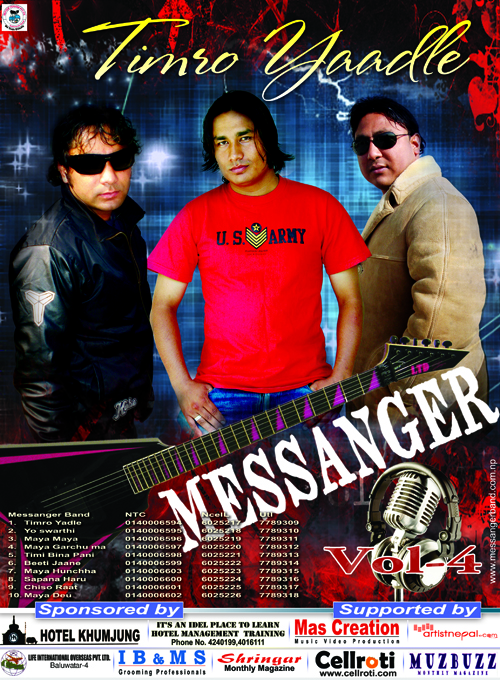 one of the most prominent singers in the Nepali music Industry, Rajesh Hamal, has released his latest album “Massenger Vol.4.” Debuting in 2052, Hamal has been continually striving to lend a different taste to the listeners eversince.

Rajesh Hamal had alreadt release his latest album Messanger Vol. 4 Debuting in 2052, Hamal has been continually striving to lend a different taste to the listeners ever since Of the 10 songs in the new album , hamal ha 5of them , viz. timro yaad le , maayaa maayaa, timi bina, chiso raat and yauaa deu. Another promising singer sameer hamal has lent his vocals to the others 5 – maayaa garchhu ma, sapanaa haru, yo swarthi, Bitijane and maayaa hunchha. the album has been released by Rhythm Readers. Prior to this, Rajesh Hamal Had come up with 3 previous albums, Messanger Vol.1,2 and 3 .

Hamal has featured others singers like Usha Bhatta, Gopi Shrestha, Sushil Sapkota and many more in his albums till date. hamal has also been entertaining the audience through live shows in different parts of the country.

Even through the original band exists no more, the frontman and founder of the band, hamal has always been releasing new albums in the name of the band itself. ” A Messenger is one who bears a message for others, and thus transmitting positivity in the society through our musical creations has always been our goal” says Hamal

Here is a list of some of the most popular music videos by the band Messenger Vol. 1 : Nisturi mayalu, Timro tyi jawaani
Messenger Vol. 2 : Timi Bina pani, Ma baachunjel, Jaau na Jaau, satauchha malai kina
Messenger Vol. 3 : k Bhayo, Aankhaamaa sajaai rakhen, nabhana mero maya. etc more then a dozen of hamal’s music videos have been aired through various television channels and there are some more projects in the pipeline.
Currently , Singer Rajesh Hamal is working with Revel Private Limited in the companionship of kuber karki. the company has been bringing a lot of artists in the light and also producing newer talents through various functions. Rajesh hamal is the CEO of the event management company. the company has successfully orgainised and managed events in 5 stars Hotels and casinos and established itself as an influential entity in the business itself.