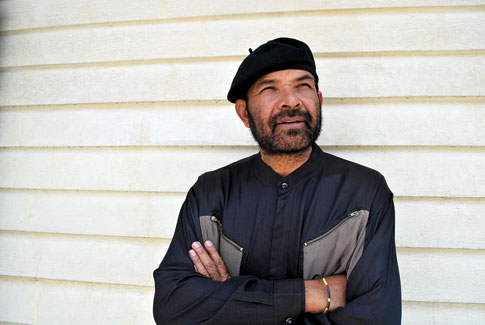 There is something romantic about Tulsi Ghimire. True, he often seems engrossed in deep thought. But there is more to that somber visage than meets the eye.
It was during one of those light, sunny days in November/December 2009 that Ghimire was strolling in Tripureswor, clad in sleek black coat and trousers. That alone might have caused this scribe to stop and take note but what really caught the attention, though, was his choice of head gear. Ghimire was sporting a beret cap, a rarity on the streets of Kathmandu.
It would not be misleading to say that today there are not even a handful of celebrities with good sense of style in Nepali film industry. Ghimire, on the other hand, is in a league of his own.
His ensembles have a touch of Paris—beret cap (a favorite of French painters of yore, especially in the movies), old brown leather jacket with a classic appeal, glided buttons on a maroon shirt.
In a quick conversation with the director, a few facts flowed. The director of Lahurey, Lahana, and Darpan Chhaaya fame feels that artists are the face of the country. “So it is their responsibility to pay attention to their wardrobe.”
The director, who is busy with his future project, “Dristikon”, shares that it is his master lyricist, Gulzar, who has strongly influenced his own sense of dress and style.
“He always wore simple plain white kurta-surwal but exclusive ones and he always stood out,” Ghimire recalls. Gulzar’s simplicity inspired Ghimire. “During my stay in Bombay from mid 70s to 90s, I often wore khadi kurtas partnered with jeans. It was apt for the season yet stylish,” he reminisces.
Even after moving to Kathmandu in 1994, he continued his affair with kurta. Recalling his early days in the Valley, he adds, “As I often wore whites, people asked me if somebody had passed away in my family.” However, at present Ghimire has stepped out of the white color zone and has made his wardrobe more colorful. Nevertheless, he still wishes to own a pair of white trousers specially dyed.
Like most men, Ghimire also seeks his wife’s help for shopping. “I seldom go out for shopping but if something catches my eyes and if I feel that it suits me, I buy it.”
The beret was one such buy from Germany. “Such caps are not available in Nepal and India,” he observes. Ghimire, who has a special liking for caps and hats, also dons stetsons hat.
“I feel that I must look smart and good,” he boldly states. Quoting Indian literati Rabindranath Tagore, the director adds, “It’s a sin not to look good.”
It is hardly surprising, then, to learn that the director also has dabbled in designing. Most of Ghimire’s ensembles have a mandarin collar (a short unfolded stand-up collar, popular in Nehru jacket). Corduroy trousers with pockets and leather patches, Nehru inspired jackets and shirts with some alteration in stitching patterns. For instance, in one of his shirts Ghimire has used both sides of the fabric and interplayed with it, breaking away from the traditional way of stitching clothes.
Showing one of the self-designed double buttoned maroon shirt, he says, “I wanted to add chains in between the two buttons but I thought it could not be used in regular days so I dropped the idea.”
Besides the choice of color, what stands out about the shirt is its attractive gilded buttons. “I like coats without pockets” says Ghimire, who admires South African freedom fighter Nelson Mandela’s sense of style.
The director is of the opinion that one should not stuff coat pockets. “It looks very odd.” He suggests that if anyone has the habit of stuffing pockets, he can replace the actual pockets with false ones.
For Super Mayos Challenge, a reality game show, where Ghimire was in the judge panel, he had designed some suits with just this feature—with the assistance of his wife.
When asked whether he also helps in the designing and styling tasks during the shooting of his movies, he muses, “After the characters and actors are decided, my crew and I sit to discuss the styling part.”
He ruefully notes that during his initial movies, there was no separate budget for this particular reason, despite the central role of costume and clothing in all movies.
“An average Nepali movie’s budget stands somewhere between three to four million, in this case the clothing and stylish part is often overlooked.” He, however, candidly informs that the budget for costumes and styling in movies is very minimal. “It floats somewhere in between hundred to hundred and fifty thousand rupees.”
According to the director, the trend of a separate budget line for styling and costumes has just started and a lot is yet to be done in all sectors of the film industry.