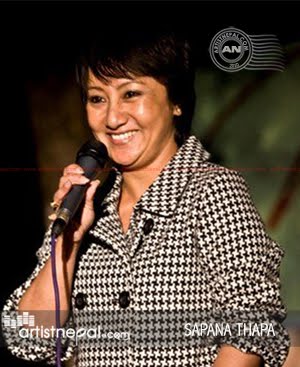 Just a few days ago, I went to watch Daisy Bariely in the Paleti series of concerts. She sang two of my father’s compositions that my mother had recorded decades earlier. Listening to those tunes and hearing those lyrics after so many years brought back memories of how simple the life of my parents were and how much they revered the music they made.

The mandolin and harmonium took center stage in our household with which my father composed most of his music. A self taught musician, he used western staff notation to jot down the tunes he experimented with in the evenings when home from his work. The weekends were dedicated for the ensembles with their contemporary music lovers who gathered in our house to hear my mother sing new compositions to the accompaniments of the madal, the mandolin and the harmonium.
Traveling into remote areas to entertain audiences who listened in awe to the melodies of the duo was another experience I got while still in my early years. The thunderous applause, which the heart rendering lyrics of ‘Nepali’ inevitably brought, still resonates in my ears today.
I have vague memories of my father’s demise in 1974 and I remember our house being swamped by hordes of well – wishers, fans and musicians who were in a state of shock at the untimely death of my father. Aavaas from Nepalaya recently bemoaned his death in the Paleti platform as one of the biggest losses in the history of Nepali music and reconfirmed that Saran Pradhan’s contribution to the Nepali musical culture is a legacy.
My mother continued on his footstep, living his dream. Acknowledged by the West Bengal Government as the ‘nightingale of the hills’, she went on to win several acclaimed awards both in India and Nepal. Employed by the Government of India in the capacity of a senior Inspector in the welfare office for the scheduled castes and tribes, my mother made sure that both my brother and I received a sound education even while she toured for concerts.
Darjeeling town and renowned musicians commemorated twenty-five years of my mother’s musical journey in the year 1981 with an evening that showcased her classic songs. The following are her achievements and some of the archived musical milestones of her life besides the other smaller scale concerts before she passed on the 4th of February 1998.