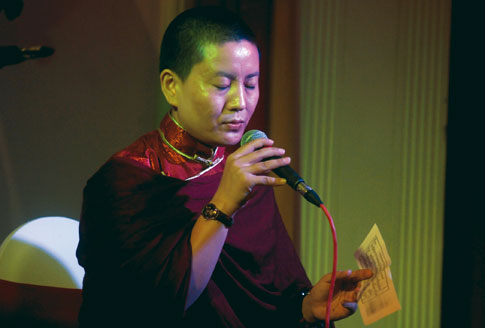 Besides the album release, the program was organized to bid farewell to Counselor (Development) & Consul-CIDA Representative Ed Doe and his wife Pilar Doe, who are leaving Nepal after the completion of Ed’s four-year tenure.

Ani sang four songs at the event, of which two were Tibetan prayers and two were penned by lyricist Durga Lal Shrestha. She was supported by Gopal Raisaily on guitars and Pratap KC on flute. The trio created a soothing ambience and enthralled the audiences. Before the program, Ani felicitated Doe couple and guitarist Stebe Tibbets, who helped her to become successful in international music scene.

Prior to singing her much-loved song ‘Phool Ko Ankha Ma’ she remembered late Girija Prasad Koirala who used to enjoy the song.

“Koirala referred to me as his daughter and he often told me he would turn into a monk if he kept listening to me,” Ani said, adding, “Looking at the present political scenario, I wish I could turn some politicians into monk.”

Ani has toured extensively to Europe and North America where her hymns and chants are liked by many. She is the founder of Aryatara School (for nuns) in Pharping.