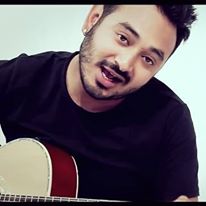 Roshan Shrestha was born in Maitidevi, Kathmandu. He started his career learning music from the year 2060 in Kaleidoscope Music Academy, Putalisadak, Kathmandu. Since his early days, He used to sing songs of various artists. Then after he further began to sing on various programs at his school and college. The environment of his locality was musical from the beginning itself. Roshan even had a band. Back home, we used to rehearse music with band mates. This was how he started. However, disbanding was inevitable and he was soon on his own. Shrestha learnt music and vocal for almost 5 years and even completed his 3rd Year in classical vocal. In the year 2063, Shrestha recorded his first song titled ‘Sochi Hera,’ which as composed, written and performed by himself. To assist his family, Shrestha even worked for Chhimeki Development Bank as an accountant for almost 3 years. However, music was a part of it and he composed several songs during his stay at Banepa on course of his service. Later, in the year 2067, He met a couple of his friends who shared common interest. They agree to serve the music industry and as a result; they came up with a plan to do a music and entertainment magazine called MuzBuzz Monthly Magazine.

· How does he juggle his career between being a singer and a publisher?

Well, what he did is completely interrelated. His passion and profession are luckily the same. As a media person, he was extremely tied up managing the distribution, content and customers of the magazine. However, he used to do things go on quite smoothly. Shrestha sometimes find it inconvenient in composing songs. But, he used to hold his guitar when he is alone and midst of silent nights; he engages himself with his guitar and words come up within his heart. His songs speaks his emotions, attitude and the reality every individual go in span of each day. So far, had been scheduled with his work plan and he fit in pretty much comfortably.

· What kind of artist he is?

Shrestha said he is in learning phase. He appreciates good music and takes guidelines from it. He listen to a wide range of artists/or genres and take challenges in practicing songs of diverse artists. He sings when he is comfortable. With happiness comes the mood and the feel of the song. Cheerfulness gives an added element to his songs.

· How long have he been a singer?

Shrestha don’t remember when it was the first time he listened to a song and started murmuring it. He wanted to be a singer ever since he was conscious enough about his career. Officially, he recorded his first song in the year 2063 and then he took that date as his access.

· What made music his first love?

The romanticism within the song or let’s say music, made his first love. When music is inbound, he finds himself as a different person; much happier and cheerful one. He finds beauty in every god’s creation when music’s inbound. It’s like what William Shakespeare once said, ‘If music be the food of love, play on.’

. How many albums/or songs had he recorded so far?

Almost a dozen of his song have already been recorded which are compiled in his debut album titled Suseri. A couple of songs like Suseri and Yo Mann have been visualized and his listeners have come up with marvelous comments. A part from this, handful of new and old artists/or band have recorded his compositions too.

· Who do his look up to nationally or internationally as you inspiration?

He found it a convenient music when he listens to john Mayer. He is comfortable to acoustic flavored music. He took himself as his milestone and wanted to do something peculiar. Nationally, he learns from the legends and his senior artists. He had been able to learn music enormously from them and every single artist have something to teach him.

He would take this as his marking stone of his beginning. He took it as, he have 9 more steps to go when he finally reach there. It’s tough but not impossible.

· These days, this trend of touring aboard for musical tours has really picked up? How did he think this has helped the artists?

Shrestha said, this as a platform to take Nepalese music to the international arena. Artists have their own problems in producing an album. Such international tours have recently geared up. Hopes and expectations are high and such tours have emancipated the newer and border horizon to the artists. Artists are paid well and their enthusiasm in music has risen. With this, we can expect richer and perfect music that’d someday compete in the international market.

· How many places had he travelled?

· With the emergence of new media like social media, how different has the music industry been?

Music industry has gone beyond the bars and to the international platforms with the emergence of new social media like Facebook, Twitter, Youtube etc. Now, the time has come when anyone from any parts of the world have access to the Nepalese music too which seemed impossible merely a decade back. The industry is richer and broader in terms of quality and quantity too.