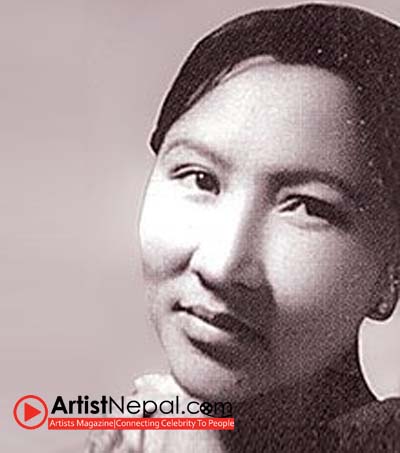 Tara Devi (1945 – 23 January 2006) was a Popular Nepali ana Nepal Bhasa singer. She was known as the “nightingale of Nepal” having recorded over 4,000 songs during her lifetime. Much of her music revolved around the themes of patriotism and love

She was born in 1945 in the neighborhood of Indrachowk located in Kathmandu. She began singing at the age of seven.Sanguri Wari nihou tyo dhara pani is her most popular song.
Tara Devi was suffering from Parkinson’s disease, which lead her to quit her career when she became unable to speak freely and move properly. For the past decade, Devi was unwell, particularly in the last four to five years as the grip of the disease took over.
Throughout her 40-year singing career, Devi gave her melodious voice to more than 4,000 songs.

Cover of one of Tara Devi’s popular albums.

The album “Afanta Ko Manma” contains her last four songs, recorded 10 years ago. Another album, “Ukali Orali” is a collection of her hit numbers. She made her debut at the age of eight with legendary Nepal musician Ustad Bhairab Bahadur.
Music lovers say Devi’s singing was a form of meditation. She was also honored by dozens of national awards.
Devi endured many tragedies throughout her life. Her husband Shiva Bahadur, a pilot, died four years ago in an accident. She also lost her eldest son.