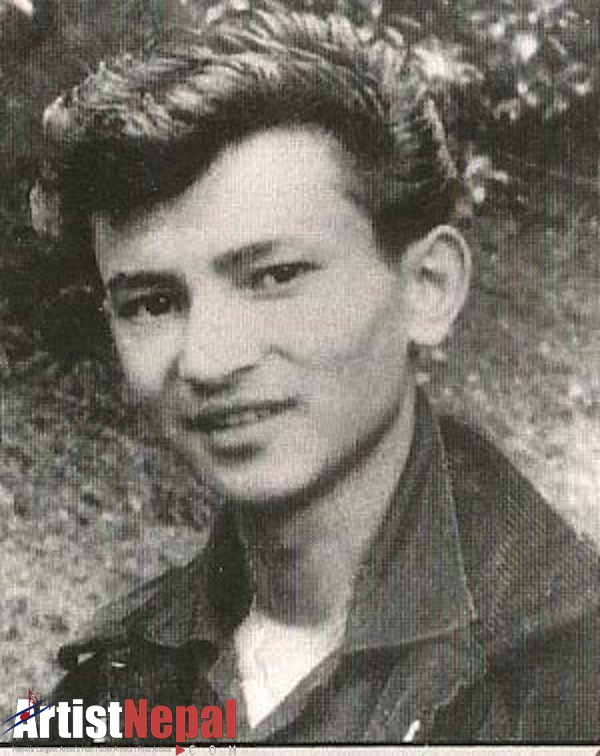 Sharan Pradhan was a lyricist and composer par excellence…a shining star in the Music scene of Nepal from 2020 BS. By 21, he was already an established name. Together with him, another artist who was also trying to prove her worth was none other than Aruna Lama and so was Ranjeet Gajmer. This era also witnessed the promotion and enhancement of modern adhunik songs.

Since his early childhood, Saran Pradhan had a keen interest in music and proved his skills right from a very tender age. He also acquired immense knowledge on the various traditional musical instruments. By the time he was in his teens, he had already learnt to play the banjo very efficiently. It is believed that this was his favorite instrument. Later, he also learnt to play the mandolin and it became one of his favorites as well. It was his mother who bought him his first mandolin, which he couldn’t do without even for a day. To further polish up his skills on this particular instrument, he joined an institution in Darjeeling initiated by the legendary Amber Gurung.

Sharan Pradhan and Aruna Lama were very good friends initially. In fact, Sharan Pradhan had a soft corner for her since the time he could remember. Music being the catalyst, and their fondness for each other further developed a strong bond between them. Later, they married on Ashar 25, 2020 BS and made numerous memorable music together.

Sharan Pradhan was born on (1943 May 03) Baishak 20, 2000 BS. He was the only child of Harka Bahadur Pradhan and Kabi Maya Rai. Since his father was employed at a government organization, he had a very healthy upbringing. Moreover, He grew up in an ardent musical environment. Since he had learnt music under the guidance of the great Amber Gurung, he developed an excellent knowledge and excelled in the field of music. While still learning, he had impressed Amber Gurung to such an extent that he was offered with an opportunity to play the mandolin on his songs. As days passed by, he turned into a fine composer as well. He used to compose music, write songs and share them with his wife Aruna Lama, his biggest fan. Initially, Aruna Lama used to sing only his compositions, most of them being real masterpieces.

Darjeeling, one time had plenty of renowned musicians. As soon as Amber Gurung shifted his base to Kathmandu, the music scene of Darjeeling was in some ways a little subdued. This was the time, when Sharan Pradhan opened a music institution called ‘Sangeet Sangam’. There was no way the music environment of Darjeeling was on a downhill slide after the operation of ‘Sangeet Sangam’ began. It was also during the same time that his music started getting noticed on a broader perspective. He and his wife, later referred to as the ‘Nightingale of the Himalayas’ were the pride of Nepali Music.

His friend from his school days at Turnbul English High School was the now established Ranjeet Gajmer. They even wrote songs together, composed music and later sang them coming out as SharanRanjeet. He completed his Bachelors in Commerce from St Joseph College and later taught mathematics and science at St Robert High School. He was a perfect teacher, a fabulous musician, a good husband and a fantastic father.

But he was physically not very healthy and was often bedridden for lengthy periods. Once it so happened that after returning from school, since he was not feeling well, he decided to take a nap as soon as he arrived home. He never woke up. He expired on Basaikh 20, 2031 BS. His two children—Sapana and Supreet, survive him.