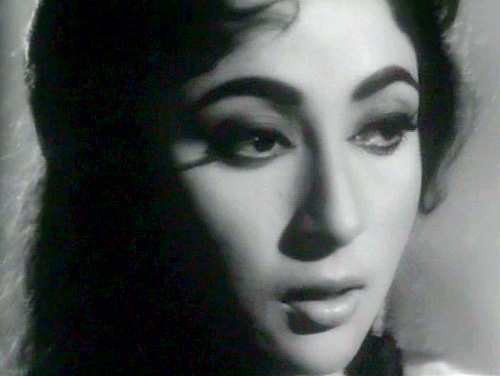 She combined talent with glamour and impishness, which soon became her trademark. Mala Sinha, a superstar from the Sixties, rings in her 74th birthday on November 11, 2010. The actress, who is of Nepali origin, went on to become one of the most popular stars of Hindi cinema right through the Fifties, Sixties and the early Seventies. Sinha began her career in Bengali films and soon moved to Mumbai to try her luck with Hindi movies.

In Mumbai, a chance meeting with the late Geeta Dutt, lead to her beginning her career in Hindi movies. The late singer introduced her to Kidar Sharma, who cast her in his movie ‘Rangein Raatein’ opposite Shammi Kapoor. But her first Hindi film turned out to be ‘Badshah’ opposite Pradeep Kumar, which was followed by ‘Ekadashi’ and Kishore Sahu’s ‘Hamlet’. Even though all three movies flopped, Sinha was recognised and lauded for her acting especially in ‘Hamlet’.

Her fledgling career received its biggest break when she was cast by Geeta Dutt’s husband, Guru Dutt, in his critically acclaimed movie, ‘Pyaasa’. Sinha’s performance was much appreciated by all and the movie proved to be a turning point for her as she now easily moved into the big league. One of the best things about the actress was that she was willing to work with any director and opposite any actor, provided she had a good role. At the prime of her career, Sinha worked with many newcomers like Dharmendra, Sanjay Khan, Sunil Dutt and Amitabh Bachchan.

She was one of the few actresses who managed to deliver hits on the strength of her own star power as well as that of the hero’s. Some of her notable films from this period include ‘Dhool Ka Phool’, ‘Parvarish’, ‘Phir Subah Hogi’, ‘Main Nashe Main Hoon’,’ Love Marriage’, ‘Bahurani’, ‘Anpadh’, ‘Gumraah’, ‘Aankhen’, ‘Haryali Aur Raasta’, ‘Himalaya Ki God Mein’, ‘Jahanara’,’Mere Huzoor’ and ‘Maryada’ amongst many others.

The actress, who lives a retired life in Mumbai with husband CP Lohani and daughter Pratibha, never received an award for her acting even though she was nominated by Filmfare for the ‘Best Actress’ for films like ‘Dhool Ka Phoo’l, ‘Bahurani’, ‘Jahan Ara’ and ‘Himalaya Ki God Mein’.

She, however, received the Bengal Film Journalists Association (BFJA)’s award for ‘Best Actress’ for ‘Jahan Ara’ and ‘Himalaya Ki God Mein’. She received the Star Screen Lifetime Achievement award in 2007 and has been felicitated by the Governments of Nepal and Sikkim. Coming at a time when melodrama was the call of the day, Sinha, who was blessed with an extremely emotive face, was known for her broad histrionics. By today’s standards, she would have been said to be overacting.

Sinha was also an actress who was willing to take risks and play unconventional roles like the one of the materialistic woman in ‘Pyaasa’, the single mother in ‘Dhool Ka Phool’ and the adulterous wife of ‘Gumraah’. It was her histrionic ability and her willingness to take risks which made her an essential part of BR Chopra and Ramanand Sagar films. Another of Sinha’s essential qualities was her ability to carry herself with grace even with the most atrocious of costumes.

Unfortunately for her, despite being just as talented and versatile, she was never considered to be on par with the Meena Kumaris, the Nutans and the Waheeda Rehmans, nor was she considered to be as glamorous as the likes of Saira Banu, Asha Parekh or Sadhana. But to her credit, Sinha was one of those few actresses who managed to traverse both territories with ease and managed to essay a variety of roles, some memorable and some not so. But thorough it all, what has always stood out has been her staying power and her ability to adapt to the changing times.

On her b’day, here’s wishing the veteran actress good health and heaps of personal joys to light up the years ahead….