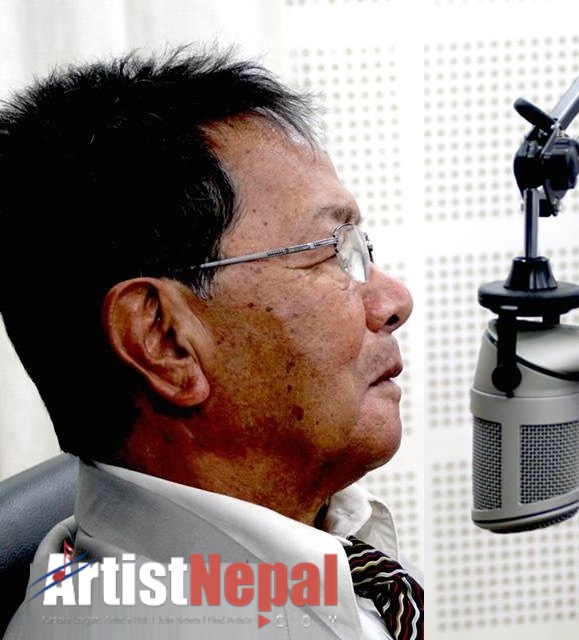 Amber Gurung was born on February 26, 1938. His father Ujir Singh Gurung, born in Tanahun district of Nepal, was a soldier in the British Indian Army and later joined the British Indian police force in Darjeeling, India, where Amber was born and raised along with his two siblings, an older sister and a younger brother. Amber Gurung and his wife Bina have four children, Kishor, Raju, Alka and Sharad and five grand-children.

Amber Gurung was passionate about music from his early childhood. His father never approved of this interest but his mother encouraged him. He started composing and singing during his schooldays, which won him recognition and many music awards. (See article, “Faslow Bhaiya.”) He is a self taught musician who learned both western and eastern classical music entirely on his own. He taught himself to play violin, piano, guitar, mandolin, tabla and several other instruments.

In the 1950s Amber Gurung started a music institute, The Art Academy of Music, in Darjeeling, where famous musicians and singers such as Aruna Lama, Sharan Pradhan, Gopal Yonzon, Peter Karthak, Indra Gajmer, and Ranjit Gajmer to name a few, learned under his guidance. His first recorded song ‘Nau Lakhe Tara’ (1960?) made waves throughout the Nepali world, both in Nepal and India. This song about the suffering of the Nepali diaspora is considered a masterpiece of both lyrics (by Agam Singh Giri) and musical composition. Many other songs recorded in the 1960s on 78 speed vinyl records helped make him one of the main architects of modern Nepali music.

Amber Gurung joined the Folk Entertainment Unit, Government of West Bengal, Darjeeling as Music Chief, from 1962-1965. He became disillusioned with the bureaucracy (?) and resigned from the post in 1965, but continued to write music and do stage shows both in Nepal and India. In 1967 he joined the prestigious Dr. Graham Homes School (?) as a Music Teacher. In 1968 he was invited by then King Mahendra of Nepal to return permanently to Nepal to establish and chair the music department of the newly founded Nepal Academy of Arts. He served as Music Director for nearly 30 years.

Amber Gurung has recorded many albums as well as singles. He has also composed the music for many musicals, and documentary and feature films. He wrote and performed (#) cantatas (need to describe), Choirs. Many of his songs have been recorded by well known Nepali singers. Besides composing music and writing lyrics he is also recognized as a literary figure. In addition to penning song lyrics, he has published three books, and many music related articles in national publications.

In 2007, Amber Gurung was invited by the Government of Nepal to compose the music for Nepal’s new national anthem. He continues to compose, teach music to select students, and is currently revising a tutorial music book for publication.

• Honored with more than 25 life-time awards and felicitations
• Frequent presenter at international music and cultural fora, including:
• “Songs of Asia,” sponsored by UNESCO, in the Philippines, Japan and China
• Conference on music education, sponsored by the International Society for Music Education, Spain