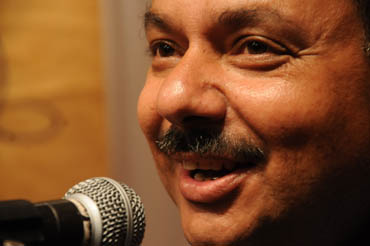 Rabin Sharma is to perform his debut solo performance as a singer at May Paletithis 28th May 2010. Paleti is a regular musical series organised at nepa~laya’s ‘r’ sala on last Fridays of the Gregorian calendar.
A representative 3rd generation singer of Nepali Adhunik, Rabin started his musical career during 1980s. His 1st recording dates back to 1978 with Neer Shah’s Merai Srijana in C.K. Rasaili’s tune. Since then he has recorded numerous songs. Among his popular numbers are: Basatale Sajhiyeki Meri Mayalu, Timi Yasai Lajayau, Juni Juni lai, Harsha le maan mero, Afailai bhar bhayo, Ainai ainako rahecha….
However the song which highlighted his among audience and critiques is Laxmi Prashad Deokota’s Yatri( Kuun mandirma janchau yaatri…) This was recorded in Ranjeet Gajmer’s music for an acclaimed Nepali film – Basudev.
“Being a full time media person, I had not been able to concentrate in music for the last 15 years as my media job demanded more of me. I take this opportunity to reconnect myself with music.” Shares Robin Sharma as he rehearses with thePaleti musician team.
“Paleti aims to diversify and include all competent singers of Nepali Adhunik. We are glad to have Rabin dai with us.” Says Paleti coordinator, Aavaas. “I also see this as the start of expansion of Paleti to the 3rd generation.”
Rabin Sharma will sing at nepa~laya’s ‘r’ sala this 28th May as part of the Paletiseries.