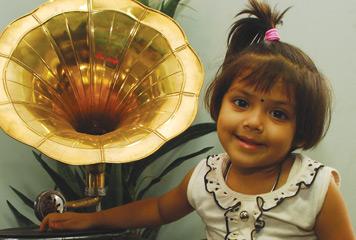 Atithi K.C., a three-year old Nepali girl, has released a solo music album and set her eyes on entering the record books. Atithi’s father, music composer Uddhab K.C., claims the child is the youngest recording artist in the world and plans to register her name in the Guinness Book of World
The album, comprising nine Nepali songs including the country’s national anthem, was released on Sunday by composer Ambar Gurung at a large media gathering.
Barely able to understand what the hoopla was all about, Atithi, supported and prodded by her father on stage, sang three songs from her album Atithi, released by Orbit Publishers, her father’s company.
“Atithi started talking when she was only six months old. Her elder sister Usna has been singing since she was four and watching her perform on stage, Atithi too started singing,” said Uddhab.
The young girl who doesn’t recognise the alphabet has been singing since she was two and has given several stage and TV performances. Atithi has also acted in a music video of her album.
But to enter the record books, Atithi will have to compare birth details with Moldova-born Romanian singer Cleopatra Stratan, who also recorded an album at the same age in 2006.
“There is no record of a singer recording an album at such a young age. We are in the process of getting Atithi’s name registered in the Guinness Book of World Records,” said Uddhab.
Are Guinness authorities listening?