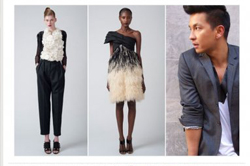 KATHMANDU — The young Nepalese fashion designer Prabal Gurung has been courted by the world’s top style magazines and won plaudits for his creations from some of Hollywood’s best-known actresses.

But it was not until Michelle Obama attended a function wearing a dress he designed that his parents, who live in the Nepalese capital Kathmandu, finally believed he had made it.

“My mom had always kind of brushed off my success. She would say, ‘Talk to me when Michelle Obama wears one of your designs,'” Gurung, who lives in New York, told AFP during a recent visit to his native Nepal.

“She was the first person I called when I heard the news.”

Gurung, who will not give his exact age but is in his 30s, is one of the hottest young fashion designers in New York.

Demi Moore has tweeted his praises, Rachel Weisz appeared on the red carpet wearing one of his dresses, and the hugely influential editor of American Vogue, Anna Wintour, has given him her backing.

But in Nepal, where making clothes is seen as menial work for women and people from low castes, he is rarely even recognised.

“Of course, I am not as famous as (local actor) Bhuwan KC,” jokes Gurung, whose dresses sell from 1,400 dollars—almost four times the average annual salary in Nepal.

“But considering the economy here and lack of disposable income Nepalese people have, they are very creative. I think they are way more fashion-conscious than lots of South Asians.”

Gurung, who returns to Nepal every year to see his family, credits his success in the fashion industry partly to his sister and mother, who ran a clothing store in Kathmandu when he was growing up.

“The person that I am today is all down to my family, especially my mom, who believed in celebrating differences and not following the norm,” said Gurung, whose parents’ marriage defied convention because they were from different backgrounds.

His mother belongs to the Rana dynasty of politicians that ruled Nepal for a large part of the 20th century, while his father is from an ordinary working class family.

The couple moved to Singapore after marrying without the approval of their parents and Gurung was born there, returning to Nepal only in his teens.

Like many middle-class Nepalese, he was educated in India, where he initially trained in hotel management before enrolling in a course at the National Institute of Fashion Technology in New Delhi.

There, he says, he realized he had found what he wanted to do, and after graduating he worked for the Mumbai fashion designer Manish Arora, whose modern take on traditional Indian dress has won him international plaudits.

But he wanted to learn more about the international fashion industry and in 1999, after spells in London and Sydney, he moved to New York where he worked as an intern for the designer Donna Karen.