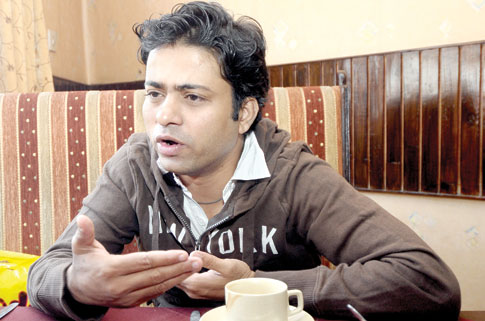 “Nepal is rich in music and Nepali musicians are of international caliber. It’s just that many good singers and composers here haven’t got that opportunity to take their music to a global platform,” promising Bollywood singer Hanif Shaikh, who has debuted as a music director in Bollywood’s recent release “Paathshaala”, shared with Republica on Monday morning.
Unlike many other international singers who have been repeating the same line, Shaikh really meant it when he said this and wasn’t just being diplomatic to win the hearts of Nepali people.
This becomes obvious when we come to learn that this Bollywood singer, lyricist and music composer is recording a Nepali album with our very own composer Jems Pradhan. In addition, what makes us believe in Hanif Shaikh is he enrolled captain Vijay Lama to do music with him in Paathshaala. Also, he made upcoming singer Akanshya Lama, daughter of Vijay Lama, sing to his notes in the film.
“Jems (Pradhan) is a very good friend of mine. He has done so much for me. He introduced me to Vijay Lama and his daughter. It was indeed a great pleasure working with them in Paathshaala. Akanshya is really a hard working girl. She practiced Hindi diction for six months and has done a stupendous job. She has started receiving other Bollywood offers,” Shaikh disclosed.
Akanshya Lama has lent her voice with Shaikh in the number Mujhe Teri, co-composed by captain Vijay Lama, in the film.
Born and brought up in Mumbai, Shaikh, 34, says music came to him as a blessing from “Allah.”
“God is really great. If he had not bestowed me with music, it would have been really difficult for someone like me, who comes from a difficult economical background, to survive in a busy Mumbai,” he explained.
Shaikh left his studies from class nine and started working fulltime to support his family. Like in many other households, Shaikh’s family definitely did not want him to get into music because joining the music industry of India then was an uncertain profession.
Out of his “instincts” and “god given skills” he made some demo numbers in 1998/99. Indeed, his work was admired by many and this motivated him to get into music more seriously.
“Sometimes you just become a medium for God and he tells you what exactly you need to do,” Shaikh made it loud and clear, explaining how despite lacking formal musical training he made his way to Bollywood.
“Paathshaala is life to me. This will direct my way to the Indian film industry. I’ve put my heart and soul to it so that I can prove myself,” the singer turned composer and lyricist added.
Talking about the recent playback scene in Bollywood, Shaikh says he will not spare effort to establish himself comfortably in the playback scene of Bollywood and is all geared up to create his own niche in the industry.
“Bollywood is huge. And it’s very challenging to survive. Things keep changing and so do people. If you don’t move with the changes, you automatically become outdated,” Shaikh enunciated, referring to how singers like Kumar Sanu and Sonu Nigam are not as popular in playback as they used to be once upon a time.
While many in Bollywood itself say that the industry has stopped producing quality music like that of Mohammad Rafi and Kishore Kumar’s time, Shaikh has a completely opposite point of view.
Said he, “That was the time when there were no means of entertainment but music and films. These were hammered into people’s heads in such a way that they still remember the songs of the time. Today there are millions of forms of entertainment. In fact this has brought new challenges amongst the musicians. And as a result better compositions are created lately.”
Prepared to face any challenges Bollywood brings before this man of melody, Shaikh is also keen on working with Nepali musicians and lyricists.
“Please call me back, I´d love to work for you guys, not because I want to be great to you, but because you guys are rich in music,” he concluded.

I’ve had a really good time with these three musketeers – Hanif Shaikh, Jems Pradhan and his cousin Sanjay Pradhan while doing the music for Paathshaala. When Shaikh asked me to co-compose with him, I was not even in town. Jems accepted the offer on my behalf. Later I went to Mumbai and we started working together.
Shaikh surely has a long journey in Bollywood. Trust in me, in one year’s time this man of notations and words will become the next big thing in Bollywood. Amongst the few nocturnal people I know, Shaikh is one for he works all night too. I’m really thankful to him for giving me and my daughter this opportunity of working with him. Definitely, I’m also a proud father because Akanshya also is a great singer.
I’m finally happy to have him in Nepal because he had cancelled so many flights earlier.